Cargo bikes in the south

Cargo bikes in the “south world” 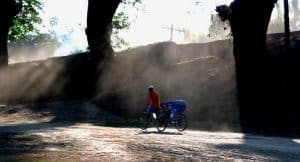 In Europe it is widely comminicated and shared that the Copenhagen agglomeration (1,2 million inhabitant) is the Mecca of Cargo-bikes, with 40 000 of them in the streets daily. But other cities and countries overpass this number and show other ways of practising velo-logistics. How are cargobikes being used elsewhere, and how frequently? How can we also learn to implement best practices? What are the consequences of non-existing institutional support?

Case study about  Bujumbura in Burundi, Dakkha in Bangladesh and Copacabana in Brazil!

The banana-kamikazes of Africa: Bujumbura and Burundi.

There are 660 000 inhabitants living in Bujumbura, in the capital of Burundi. In this African city, just next to Lake Tanganyika, 10 000 bike-taxis are  providing cheap transportation and nationwide there are over 23 000 of them. In the capital they provide mobility services to 100 000 to 200 000 passengers per day. We can estimate the modal share of  bike-taxi to be 6 to 11% in number of all transportation[1]. They  are used  to reach remote places and bike-taxis offer alternatives to or complement public transport as well. They also used  a lot in city logistics for freight services as  they enable to deliver and transport food and other raw products from production camp to processing facilities or distribution centres. The craziest drivers are called “banana-kamikazes”[2]as they traverse the tropical mountain with old non-braking bicycles with 40-80 kg of goods on their rear rack. Unfortunately, this results in Burundi having one of the biggest fatalities rates for bicycles and pedestrian.

In the countryside 80-90% of traffic  is related to bicycle travel. For the inhabitants of the countryside the bicycle serves as one of the  main logistic problem solving tools.  People transport everything on their bikes. Usually all the members of the family share a bike to get to school, reach markets, and to transport goods… Bikes are a key tool for self-sustaining  practices.

Most of the bikes used in Burundi has been constructed in India or came second hand from Europe. Nevetheless, the strong, long-lasting rear carriers are manufactured locally by passionated low-tech mechanics. They  also improve their bikes with various, low-tech reinforcements. Some of the Burundians even construct their own bikes made of wood[3].

The main difficulties  for the bike-taxi drivers in Bujumbura arethe restrictive bureaucratic regulations and corruption. The government forbids them from enter parts of the city center, and bike-taxi drivers also suffer from causeless police harassment, according to descriptions. In 2015, the Government introduced a mandatory plate and an expensive visibility jacket to wear. This decision badly affected the bike drivers as many of them already struggle to maintain a basic standard of living. Bike drivers response  to this burdens was to create a syndicate to defend their rights and their livelihood. However they still face difficulties in to getting useful protective policy, and they are still easily busted by corrupted policeman according to drivers. In this survival fight the syndicate continues to reinforce their rights and support the everyday life of bike drivers.

Copacabana is a small district of nearly 8km² next to the famous beach of Rio de Janeiro. Among the  12 million inhabitants of the metropolis 160 000 people live in the district of Copacabana. This gives a high  density of the area, more than 20 000 people per km². The district is mostly populated by middle class and upper-class residents. According to the Brazil bike association cargo bikes in Copacabana are used for more than 11,000 deliveries every day with a huge diversity of usage (restaurant, laundry, market, pharmacy, construction material, pet shop, flower shop,) with the help of 363 bikes (normal bike, trike, cargo bikes)[4]. They transport mostly goods from all of the retail shop of the area (see map). The largest fleet is owned by a pharmacy  which has 8 bicycles and makes more than 80 deliveries per day, providing employment to dedicated medicine messengers. The diversity of cargo bike types is very high. Construction goods  are delivered with “push-carriages”.  Many laundry centers use normal bikes with adjustable wood sticks to clamp the washed pieces. A lot of street vendors are also selling ice-creams and refreshments on three wheel cargo bikes along the crowded beach.

During the summer period the beach and the location attracts thousands of tourists and local inhabitants, for example, during carneval or summer concerts. At this moment cargo bikes represent the best and only viable solution to get trough the traffic burden, being able to move in massive pedestrian volume, across the small street or helping commercial activities to get the necessary raw materials.
They take care of the so-called “last-mile” delivery making in average less than 5 km to get to their destination point while they enable to maintain low prices.

As for the cargo bikes themselves, it seems most of the bikes has been manufactured locally by Brazilian craftsmanship, most of them are directly located in the metropolis. They are constructed to handle very big loads, enduring abuse with long lasting material, and using low wearability parts. They are coloured according to the shop they are serving, usually with easy parking possibilities in front of the shops.

Dakha is one of the biggest metropolis in the world, there are 15 million inhabitants in the metropolitan area of 154 km2. Cycle rickshaw travel is the most significant means of transport in Dhaka’s congested and narrow street.s Cycle rickshaws represent approximately 29% share in number of personal transportation. There are an estimated 500,000 cycle rickshaws, which means that there is one rickshaw for every 25 inhabitants and they are used mainly for short trips about 2-5km[5]. Rickshaws are able to carry up to 250 kg with two passengers on their versatile back extension. It is also estimated that  about 5000 “special rickshaws” are only taking care of freight-logistic issue. Rickshaws are used nearly everywhere in the countryside to carry agricultural loads and children to school. In rural areas in Bangladesh, sometimes  people travel up to 80km /day for a delivery. They  represent the easiest moving  tool for this mainly analogical-peasant laborer country.

The rickshaw industry plays a major social function because of the employment possibility they offer in a country where 30% of the population is illiterate. It is one of the most accessible jobs, indeed some two million people are working as rickshaw pullers throughout the country. Most of the rickshaws drivers are renting they engine from a rickshaw owne[6]r. Usually a company is functioning with approx. 80 rickshaws. The drivers is required to pay a daily rent to use a machine. Usually they send back most of their earnings to the countryside where their relatives are living.  Drivers often sleep on the bikes or next to it given the poor living conditions and the warm climate.

Rickshaws are very beneficial to  this very congested, polluted city because they reduce road space occupancy and they have an important role in reducing emissions from old cars. In 2005 the Dakha governement tried to ban them of some public area in the city center, with the result of this regulation creating more traffic jams. The ban was lifted after a few years thanks to local and international mobilisation. For example the rickshaw drivers organised huge public demonstration to promote their rights to the city. Nowadays they have to wear on the bike a compulsory plate to prove they are registered. Every few years the police conduction an inspection raid confiscate the “non-legal” ones.

Most of the rickshaws are of an old design dating from the 50’s from the time they spread widely in the country. They are easy to maintain  and  repareable in a lot of ‘user-hacked’ way. Most of the frames have a lot of reinforcemnent for abuse. The major drawback of the design is the single speed wich tend to limit the velocity possibity while carrying big loads.

Bicycles can provide efficient solutions for city logistics in almost any type of situation.  Cargo bikes usage doesn’t depend on the density of bicycle path or only on bike friendly regulation. They are in use because they represent the cheapest, fastest and most labour intensive alternative to any motorised transport system.  They can serve to carry almost anything anywhere. They permit the reduction of poverty and increase in social equity transferring incomes from middle class to the poorest. They permit the continuity of human-powered transportation as one of the multimodal tools.

No public infrastructure such as roads should be designated for a specific VIP motorised privileged class. Rather than assigning roads for a few advantaged sections of the society, functional classifications should be decided on the basis of scientific, social and environmental approaches.

For example the banning of cycle rickshaws on the main roads in Bangkock in the 80’s  has liberated more space for privately own cars and two wheelers,  resulting in an increase inthe level of traffic jams and pollution to such a level that nowadays the average speed  of cars is only  9km/h. People take mopeds to do short trip of less than 3km!

In many southern cities  it is also possible to observe a lot of street vendors on bike or wheels selling the most varied type of goods and foods.Those mobile market tends to develop organically around hubs and frequented areas. This makes the cities more vibrant, user friendly and gives livelihood possibilities in informal sectors.  Rickshaws, tricycle and cargo bikes  are the main tools to re-embed the  economic to muscular and creativity of humankind! This fight is in close connection to pedestrian right for safety. Non-motorised transport mediums are still the largest fatality victims in accidents in the transportation sector. According to the WHO more than one million people are still dying every year because of direct road fatalities. 90% of these accidents occur in the global south. Millions more because of indirect pollution and capitalist speculation.

The lack of political sexiness of the rickshaw,  freight bicycle, and bike taxi for most of the professional-politician-decision-maker-Vagabond in Power- and they link to big oil corporation or automotive industries maker could explain most of car friendly attitude and decisions.  Banning the weakest from the commons has always been the way to create new monopolies and to serve the cultural propaganda of the endless materialist growth. Bikes represent an emancipatory solution for thousands but they are not allowed to use them in favourable conditions to enable the shift toward a sustainable trasportation network.

It  is time to re-localize the economy with the help of Cargo bikes !